The barbel is a river fish. They are slim and streamlined. Being a member of the carp family their colours are green or brown backs, golden-bronze flanks and pale bellies. With its streamlined torpedo shape and paddle like fins it is one of the most recognizable fish in our rivers. 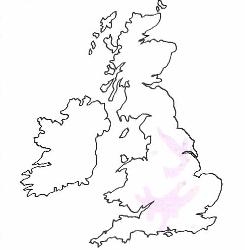 Distribution See map on right. Originally found only in some rivers flowing into the North Sea, the Barbels reputation as a sport fish has led to its widespread stocking in many other rivers. There has been no success in introducing them to Ireland or Scotland.

Where are the fish ?

Classic Barbel swims will include beds of ranunculus common water crowfoot, areas of depression in the river bed, overhanging trees, and fast glides including the tail of weir pools. Big specimens are largely drawn to snags, and almost all rivers will have swims of this sort, with a resident population.

Being a bottom feeder you want to get down to the bottom as quick as possible. They will take most baits like worms, maggets, castors, crayfish, shrimps, snails and freshwater mussels, etc…They will also take larger offerings like luncheon meat or cheese.

With the smaller baits you will need to feed the swim, try using hempseed, maggots, worms, casters or even sweetcorn to draw the fish out. They can be very cautious about taking bait, especially on clear calm days when they can see around them. On days like these you will have to try something that doesnï¿½t make a lot of noise or any sudden moves in the water.

If the weather has been bad for a while and there is a flood on in the river, they will take the food quicker, because it might not be there in a few seconds.