If you are coming to Ireland for a Fishing trip, Note that due to the decline in Eel stocks Eel Fishing is banned in Ireland. So please don’t do it

The eel, The long, slippery, slimy, sinuous bodied, big mouthed snake like fish in our waters. No wonder most fishermen don’t like catching them, with their slippy slimy bodies, but hook a big ones and you will never forget it, and want more. If they manage to pull themselves back into their bolt hole you are in for a long fight. 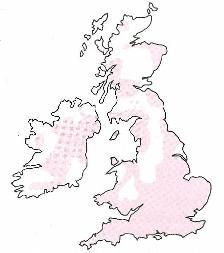 Distribution ? See map on right. Eels are common throughout the lowland rivers and lakes of Britain and Ireland. They are also found as far north as Scandinavia and south to the Mediterranean.

Did you know that after spending several years in the freshwaters, the eel starts to change. It turns from yellow to silver, its head becomes more pointed, it stops feeding ? storing up plenty of fat to sustain it on its long migration and its eyes become larger, ready to adapt to life in the ocean.

Now ready for migration, it sets off for its destination, the Sargasso Sea in the Atlantic, near Bermuda. It is thought that it spawns in very deep water (up to 400m/t300ft deep). After spawning the eel dies.

When the young hatch they are carried by the Gulf Stream until they reach Europe?s shores. During this journey it is transformed from a leaf-shaped larva to a tiny elver – see the picture on the left

what happens if you run out of water?

Some of its passage may be overland. It survives out of water longer than most fish by closing its small gills and keeping them supplied with water held in a large gill cavity (seen as swellings on either side of its head).

Where do they hang out?

It is all very well knowing the methods for catching the fish but if you don’t know where they are, then the method is no good to you. 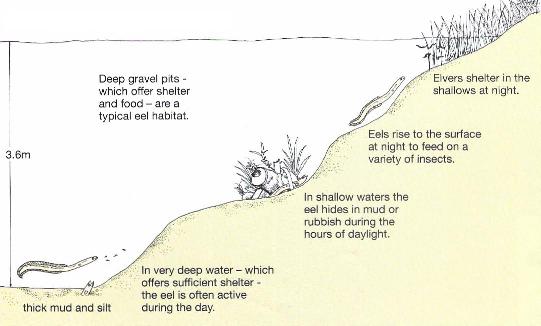 Where will you find them ? – In shallow waters it will like to hide in mud or rubbish during the hours of daylight. In deeper waters it may be active during the day and scurring around the bottom in search of food 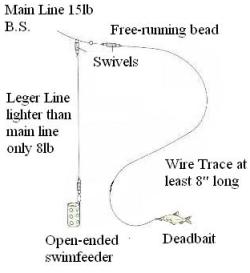 How do you catch them ?

There are several methods for catching them. These include dead baiting and legering with worms,maggots,etc… as we said in the vital details they are not a fussy eater and will eat just about anything.

The first thing to remember is eels have teeth, and a wire trace is a must, especially if fishing deadbait and there are pike in the water. 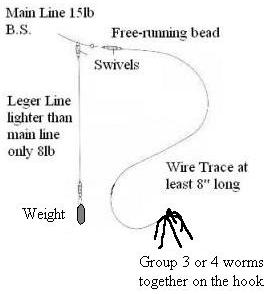 Try using both worms and deadbait, when you catch an eel take a note of the shape of its head, now if it’s a large head, that will mean that the ones there will be predominately predators, and will require fish baits. However if they are small pointed heads, you can stick with the lobworms.

Free lining may work sometimes but if the fish feels any resistance when it trys to take the bait it will drop it and leave, with the leger and swimfeeder on a seperate line attached to the main line via a swivel they do not create any resistance for the fish

If you have not fished the swim before, try pre-baiting it for a couple of weeks before hand to draw them into the area. Note if the area is known for holding fish don’t pre-bait as you will draw in all the smaller ones.

Something that might help in pre-baiting the area is your own bait mix, if you are pre-baiting for a couple of weeks with your own bait when it comes time to fish the swim the eels will be used to eating the bait. A good book for preparing your own bait is by Marc Simms entitled fish bait formulas. This has bait designed for scavengers like the eel.