The Large Mouthed Bass – Except for us humans, adult largemouth bass are the top predators in the aquatic ecosystem where they are naturally found. One thing you can be sure of is if you hook one you are in for fun, mainly due to the excitement of their fight they will often become airborne in their effort to throw the hook

Natural Diet – The young feed primarily on zooplankton and insect larvae.
When they reach about two inches in length they become active predators.
Adults bass feed almost exclusively on other fish and large invertebrates such as crayfish. Larger fish prey upon smaller bass.

Distribution – Largemouth bass were originally distributed throughout most of what is now the United States east of the Rockies.
There are limited populations in South-Eastern Canada and North-Eastern Mexico. Due to its importance as a
game fish, the species has been introduced into many other areas worldwide, including nearly all of Mexico and south into Central and South America.

In the UK and Ireland there were reports of waters being stocked in the 1940’s/50’s, usually they were close to USAF bases. It is believed that none of these stocks
have survived, this is probably due to the water temperature in the UK being too low.
There are stocks in France, Portugal and Spain where the water temperature would be more in line with the US.

The world record for a large mouth bass has stood since 1932 – the record fish weighed in at 22lb 4oz and was caught on a Creek Chub Fintail Shiner by George W. Perry in Telfair County, Ga. 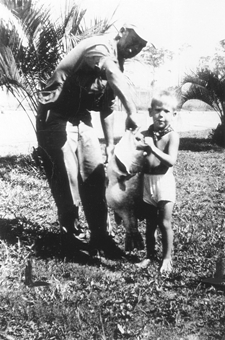 Where are they hiding out

Largemouth bass seek protective cover such as logs, rock ledges, vegetation, and man-made structures. They prefer clear quiet water, but will survive quite well in a variety of habitats

How to catch them 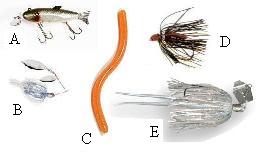 The most common baits used in the the pursuit of bass are lures such as
crankbaits (A), spinnerbaits (B), plastic worms (C), and jigs (D), also a recent development in the hunt for bass is the use of clatterbaits (E). Also recently the use of large swimbaits was been adopted in the pursuit of trophy bass that will often Scavenge for juvenile fish. Live bait, such as night crawlers,
minnows, frogs or crawfish, can also be productive. In fact, Largemouth bass are known to take any bait it considers alive

What tackle to use

Although the first things you need are the rod, reel and line, you can’t buy these until you know something about the fishing you are going to do.

You have to address these issues before running off and spending your money only to find the equipment you got is not suitable for the fishing you are wanting to do.

When you have worked out the fishing conditions and method you are going to try the first thing to get is the rod, these are many and varied. Rods are made out of 3 composites – fibreglass, graphite, and boron. They come with different action or power. If your chosen method in spinning on open clear water then you will get away with a fibreglass rod with a light action.
If the water you are fishing is weedy or has obstacles, or if you are going to be bait fishing then you will be better off with a graphite or boron rod with a heavy action, NOTE – before you fork out big bucks for a boron rod make sure fishing is for you.

The reel maybe easier to pick than the rod but you can still get it wrong. There are 2 different types – spinning or bait, but even these are not straight forward, with the spinner you can have open or closed face. If you are only going to spin and are not sure of the techniques for reeling in or playing the fish I would suggest you get a spincast reel as there is less chance of getting the line in a tangle.
The baitcast reel is a heavier reel and is open faced. You want to get a good reel so follow these points and try to get a reel with most if not all of these features.

You will want to fill the reel to its maximum, this allows the line to peel off the spool smoother, you can do this by using old line for the backing or you can wind electrical tape round the spool.

This tip works in the heat of summer time and also in the cold of winter when the bass are sluggish, try fishing with a large golden shiner, these are one of the best things to use
to catch trophy bass.