In Britain the pike is the largest native predatory fish. Holding this distinction has made it the target of many anglers hoping for the catch of a lifetime. 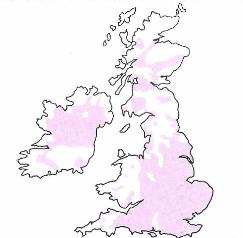 Distribution – See map on right. They are widespread in lowland rivers and lakes. They don’t thrive in either fast-flowing rivers or in highland waters, the latter tend to be acidic and low in nutrients.

Season – This varies depending on the waters. Rivers are usually June to March, but in some waters its October to March.

So What Makes It A Success ?

Most of its distinctive features– its camouflage colouring, eyesight, body form and fin arrangement are all a result of adaptations to its predatory lifestyle –all donate in making it fast, efficient and streamlined, and this makes it a successful hunter. The unique features also mean that it cannot be mistaken for any other fish.

Where Do THey Hang Out?

It is all very well knowing the methods for catching the fish but if you don’t know where the fish are, then the method is no good to you.

Where will you find them ? – shallow weedy areas that are used by spawning fish, objects sunken in the water, sharp drop off in the water, in the outside of a bend in the river if it is deep, reeds along the side will give it cover and cast a shadow over the area, a channel or side drain will attract them – it will search these for lone or injured fish.

A Word of Caution – Handle With Care

Pike should be handled with extreme caution when out of the water. It’s frame cannot actually support its own massive weight without the buoyancy of water. Try to keep them in the water when removing hooks. Also remember to watch your fingers because they have extremely sharp teeth and a heck of a bite.

How do you catch them ?

There are several methods for catching pike. These include live bait, dead bait, spinning and more recently fly fishing.